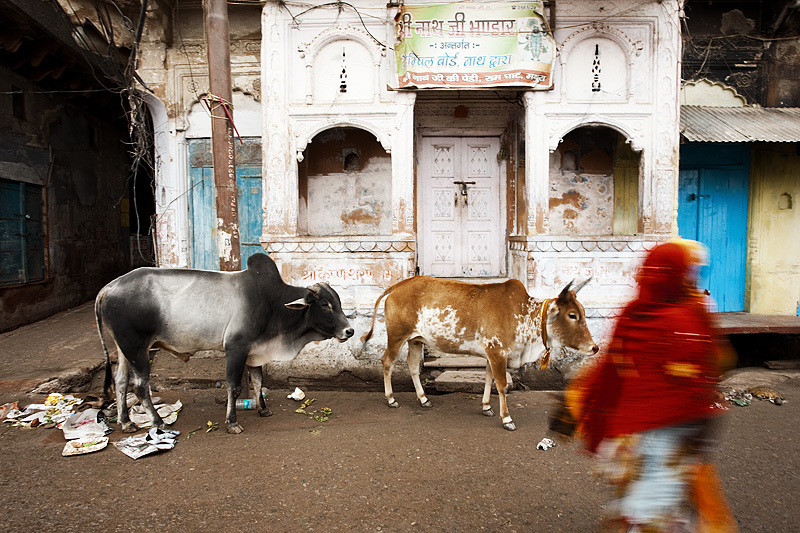 Residents of Mathura saunter by an ancient edifice.

I did it! Finally, I reluctantly fled Delhi because I felt I was getting stuck there. Surprisingly, this is my first trip to Delhi where I actually enjoyed the city and its residents. The mild weather played a major role. It seems the natives were less agitated because of the cool autumn breeze and sub-100 degree (F) climate. Normally, most foreign tourists remain in Delhi a few days due to flights or to take care of administrative issues such as obtaining visas. I stayed over three weeks and for the first time since my first ever trip to Delhi, I revisited tourist attractions I hadn't seen in nearly 7 years.

Good times overall, however it seems the powers that be felt a double or triple increase in admission prices were somehow justified. In absolute terms, it's only a few extra US dollars but I still question the increase because there's little stopping them from doubling the price again and again in the near future. Worse yet, most Indian attractions operate on a tiered system where foreigners are assumed to be wealthy beyond imagination allowing us the privilege of paying dozens of times more than a "poverty stricken" Indian tourist whose chauffeur just drove them in from Mumbai in a Lexus sports utility vehicle. The Taj Mahal is now 750 rupees, nearly US$20! The admission price is completely out of scale in comparison to the local cost-of-living.

In the end, it comes down to a choice and I will, more often than not, choose to pay the ridiculous entrance fees. However, I continue to maintain my right, not only to openly gripe about such greedy behavior, but also to passive aggressively scribble childish messages on the bills with which I pay the fees. 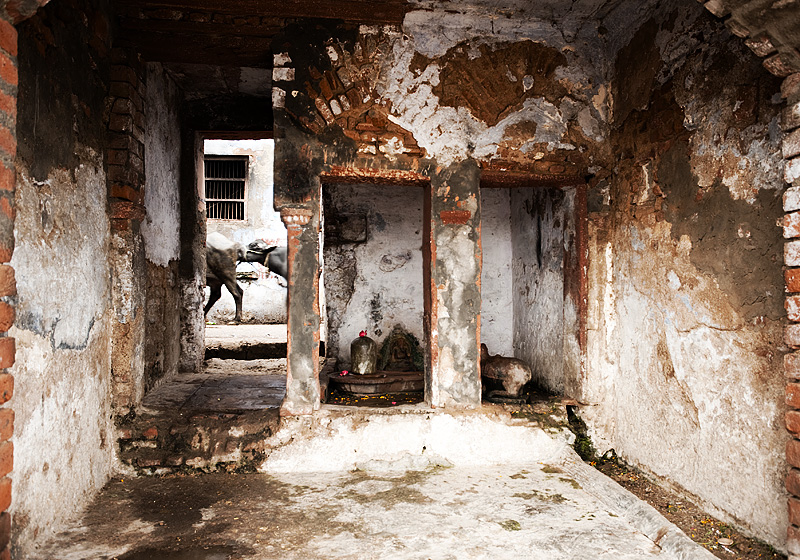 Cows pass behind a worn building housing an altar.

Ok, back to Mathura. Mathura is on the map because it boasts the birthplace of a famous Hindu god, Krishna. The little I know about Krishna involves his mischievous deeds as a child. It's written he'd steal the clothes of milk maidens as they bathed in the local waters. Oh how cute! However, holding the little god by today's standards, he'd be charged with petty theft and impugning the high dignity of a fair damsel - oddly enough, there are actual laws in India carried over from British rule that state some similarly phrased and antiquated notion.

Devotees pour in from all over the country to receive blessings and take a dip in the nearby sacred Jamuna river. The town is only located a few hours from Delhi but foreigners seldom manage to stop here due to its unfortunate placement between Delhi en route to Agra (home of the Taj Mahal). Most foreign tourists are so anxious to reach the Taj Mahal, they overlook this beautiful ancient town. I fell victim to the pull of the Taj my first trip to India as well.

Located within the center cubby hole in the photo above is an upright cylinder shaped object representing the penis (or lingam) of quite probably Krishna. Devotees rub their hands over the lingam in a symbolic gesture that never fails to charge my imagination and leaves me in desperate need of a cigarette. And much like other pilgrimage places, there is an overabundance of traffic congesting cows and warring monkey factions.