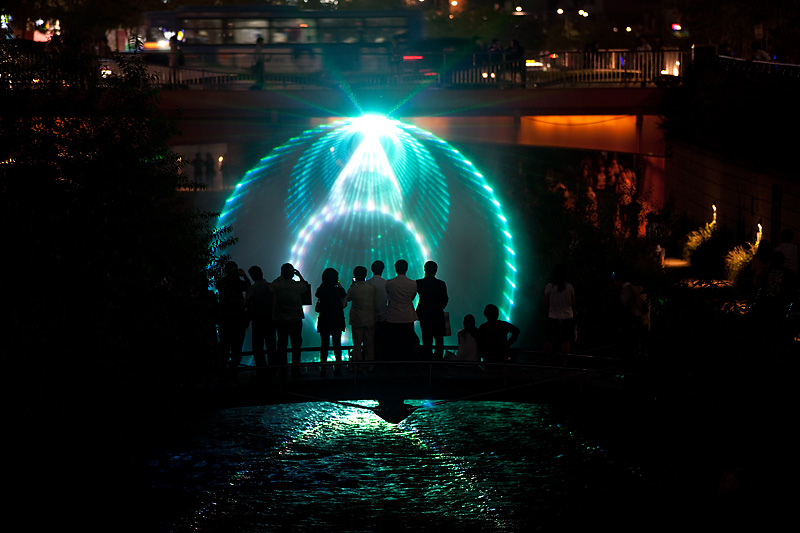 The laser light show seems to catch most tourists off guard at Cheonggyecheon. No one plans to see it but nearly everyone seems to stop when they do. A spray of mist is sent up into the air which the laser is able to use as a canvas to draw its colorful images.

Hat's off to Seoul for sparing no expense this summer to provide entertainment for locals and foreigners alike. The Seoul city hall/Cheonggyecheon/Gwanghwamun areas are packed with enough reliably scheduled excitement that generally, whenever I ventured outside for photo opportunities, I made sure to end my evening in that action-packed area.

If the video doesn't load, click here to go direct to Vimeo.com

A video of the various areas around Cheonggyecheon that provide entertainment for everyone that wanders by and photographic fodder for those that don't have day jobs.

This footage was collected with my uncle's Canon 5D Mark II during my three days of "evaluation". Ultimately I decided not to buy a new Mark II because the files sizes are incredibly large and that would only mean another trip to the electronics mall where my wallet empties directly into the hands of computer hardware stores. More hard drives, accessories, etc. I'm not ready to make such a commitment until I can actually begin earning money from these shenanigans.

As I mentioned yesterday, this is my last real-time Korea photo (& video) post. I'm currently in Delhi, India shaking off some Korean frost while getting accustomed to the 90 degree (32C) weather. It's time to say 'good bye' to my winter jacket and long pants, and 'hello' to my butt-cleavage shorts!